We have started selling the puzzle Mirii 4x3. This puzzle will be shaped in four intersecting triangles when it's assembled. Puzzles that were based on this shape have been designed by others in times past but they were almost like a geometric object and their pieces didn't interlock much, just touched each other on the edges of triangles and all or most pieces were the same shape. 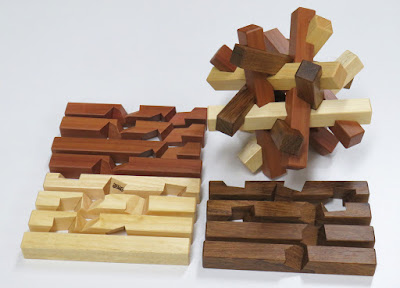 When Juno designed Mirii 4x3, he gave himself a task to design every piece which could connect and interlock in an elaborate way and he aimed to make each piece have a different shape. Then, he made a prototype using pine timber. After he made the prototype, he made up his mind to make puzzles with three different timbers. The timbers he used were Silver Ash (citrus family tree), Jarrah and Blackbean. These are all representative trees in Australia.

Mirii 4x3 is a difficult puzzle. The colour of the pieces can be a hint to solve it but the angles and the direction of crossing pieces of this puzzle are not seen in everyday life. So, you may be confused when you assemble Mirii 4x3 with which direction should make it up from where. However, it is well worth assembling. After you assemble it, you will see a beautiful puzzle that looks like a star. So, I think puzzle lovers would be satisfied with solving Mirii 4x3. This puzzle can be assembled by yourself (which means it can be assembled with two hands) but the surface of the piece is smooth and slippery, so it would be easier to use rubber bands for supporting it temporarily. 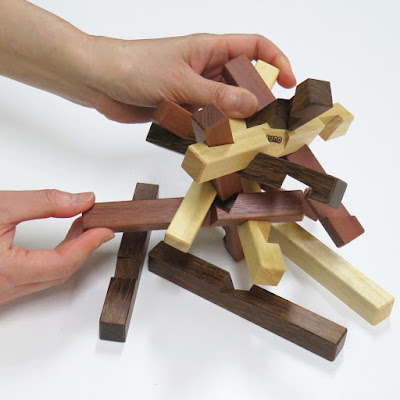 I hope you will pick up the puzzle that looks like a star as one of your Christmas ornaments at home. 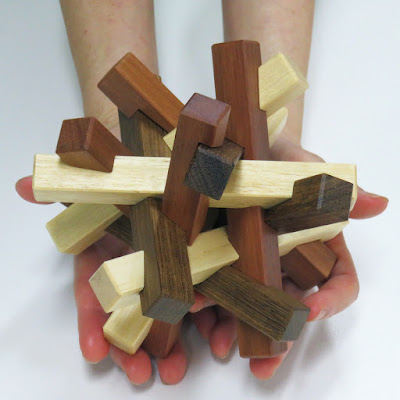