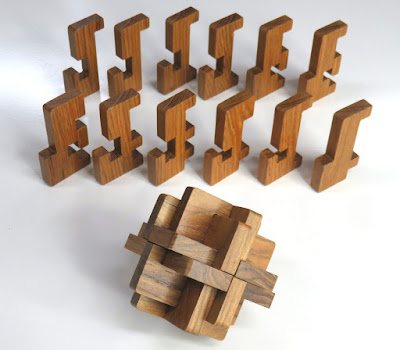 Shuriken is a kind of weapon also called a Ninja star. There are various types of shurikens that have symmetrical and flat shapes. Juno designed the puzzle preserving its highly symmetrical shape and he made it three dimensional, so he named the puzzle as 3D Shuriken. 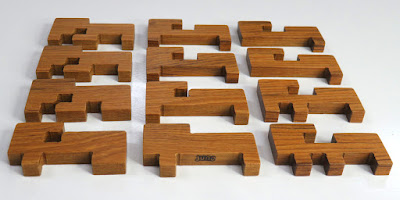 It is a very difficult puzzle and Juno says that it is almost impossible for human beings to assemble the puzzle if the puzzle pieces are handed disassembled and you have no preliminary clue about the orientation of the pieces. There are a possible 297 assemblies to the puzzle but only one can be assembled in three-dimensional space. 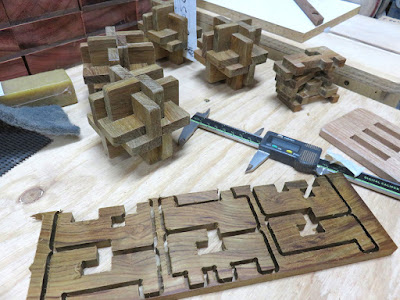 The timber used for the puzzle is Burmese Teak sold as "second grade" because there are lots of knots on the surface and the grains are very woven. These kinds of timber are not popular for boat builders because they don't want knots, but we could avoid dead knots when we cut the pieces and also Juno really likes the character of the timber. We had a win-win situation with a Teak lumber dealer and happily bought this gorgeous and precious timber. 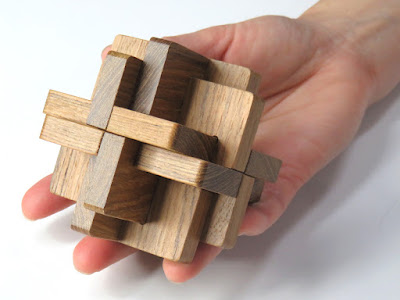 Juno made a test version of the puzzle during the production and we are planning to put it on eBay auction in early September. A few of my miniature puzzles would be put on auction as well, so if you buy something else together, the shipping cost of the miniature puzzle is free because the puzzle has almost no weight and it can be combined for shipping without extra charge.

If you would like to get and enjoy the puzzle very soon, yep, they are available at our online shop.

Yukari
Posted by pluredro.com at 8:36 AM

We have started selling our new puzzle "Meanders Box." 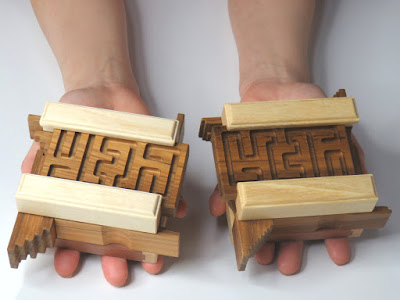 After Juno finished making Heart Case, he started making Spade Case, but he soon realized the price of the puzzle will not be in the range of the other trump card series because of too much expected CNC work. There was no appropriate room to put spade mark on the box as well. He changed his initial plan and decided to continue making the puzzle as Meanders Box. (Please be assured, he has already been working on Spade Case.) 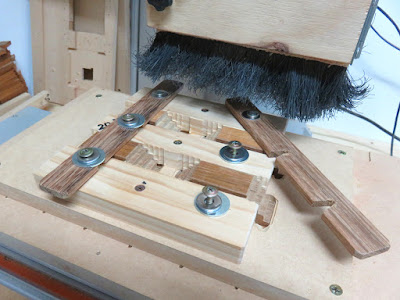 There are two types of Meanders Boxes. Both Meanders Boxes have very high level solutions and it requires 172 or 348 moves to fully disengage the grooved lid. The puzzle also has multiple challenges. By rotating or flipping the lid, there are four possible orientations and each orientation has a unique solution. 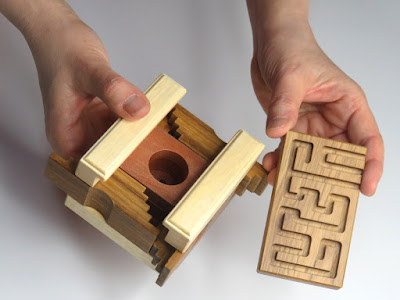 It is a very difficult puzzle indeed. Juno had no intention to remember the solution of the puzzle and decided to cheat by adding two screws on the bottom of the box to easily assemble or disassemble the box. If you are stranded in the same way as the meanders of a river, you can disassemble and reset the box. 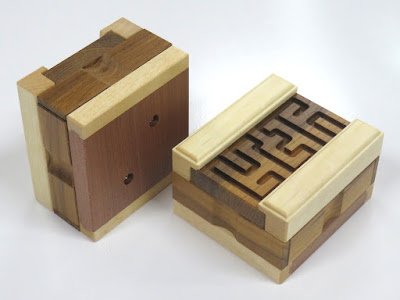 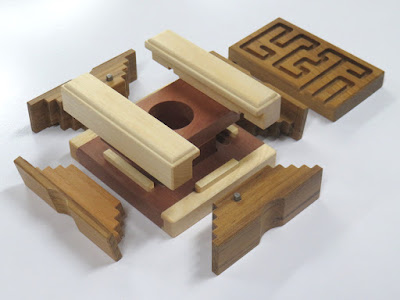 Three kinds of timbers, Burmese Teak, Rose Alder and Silver Ash are used for the puzzle. Burmese Teak is beautiful and durable timber though it makes every woodworking blade dull very quickly. We decided to introduce a drum sander in our workshop to deal with the issue and the drum sander started working for the puzzle straight away. Maybe we can introduce our drum sander someday on this blog because Juno customized it a lot and you may be interested in what he has done for puzzle making jobs .

Meanders Box at Pluredro Shop
Posted by pluredro.com at 8:50 PM